What do they think of the Index?

> See the Index in 5 additional languages:

Paris (France) – 18 November 2021 – Argos Wityu, an independent European investment fund, and Epsilon Research, the online platform for the management of unlisted M&A transactions, today published the Mid-market Argos Index® for the third quarter of 2021. This index, launched in 2006, tracks the valuations of eurozone private, mid-market companies in which a majority stake has been acquired during the last six months.

After a series of record highs over the last three quarters, the Argos Index® declined to 11.0x EBITDA in the third quarter of 2021, but remained at an historically high level. This decline came about because:

The multiples paid by investment funds have contracted.

Stable proportion of transactions at multiples in excess of 15x EBITDA.

M&A activity in the eurozone’s mid-market segment was mixed.

> You can download the press release under "Data Publication" (left) 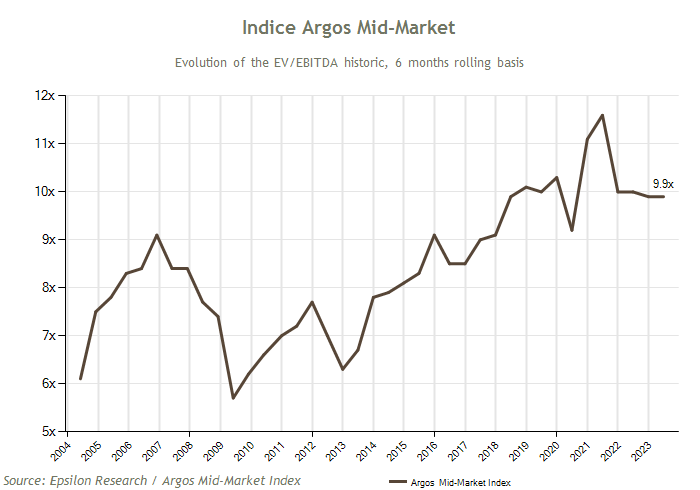 I- Breakdown per main industry sectors

Carried out by Epsilon Research for Argos Soditic and published every quarter, it reflects median EV/EBITDA multiples, on a six-month rolling basis, of mid market M&A transactions in the euro zone.

The preparation of the Argos Mid-Market Index is based on a rigorous methodology and in-depth scrutiny of M&A transactions making up the sample :

The Index in perspective:

The strict methodology followed guarantees that the index is rigorous, relevant, stable and transparent. The goal is to offer market professionals and company managers a reference tool for understanding the evolution of acquisition prices in private company transactions.

“The Argos Index® is an important benchmark for valuing unlisted European companies and is based on very reliable data", Éric de Montgolfier, CEO of Invest Europe (See his interview)

> Register to receive the Index as soon as published